The Origins of the GEO SQUAD

One year ago, work began on a comic that would shine a light on the shrouded yet fascinating world of geo survey, the importance of surveyors, and their work around the world. The comic had some important questions to answer: what is a surveyor? What do they do? And most importantly, what would the world be like without them? This is where we start our story – a story that begins with an above-average gang, in an average school, on a below-average day…

While attending a totally tedious and dismally disheartening school careers exhibition, four friends discover a set of mysterious virtual reality headsets. The group put them on, and in an instant they are transported thirty years into the virtual future. There, they discover a city – their city – in utter ruin. All four are horrified, but they manage to convince themselves that what they are seeing is just a figment of someone’s disturbed imagination. That is, until a mysterious cloaked figure appears before them and tells them that this is no imaginary scene; it is real. It is their future…

Before Kwame, Setsuko, Miles and Maddison can respond, the hooded figure vanishes – tasking them to contact him again when they are sure no-one is listening in. Barricading themselves inside an empty classroom, they leap straight back into the virtual world. Only this time, the four find themselves in a vast, dark cave, littered with technology: strange electronic devices, huge computer banks, and a half-finished, oddly human-looking robot hanging from cables in the corner. But the gang are completely mesmerized by something else… A hologram stands in the centre of the cave. It’s the time traveller, welcoming them to ‘the home of the Last Surveyors…” 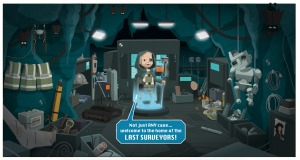 At this point, it’s safe to say that the gang have some questions… the first one being, what on Earth is a surveyor?

The hologram explains that surveyors were mappers, explorers and masters of technology, and their job was to keep both people and the environment safe – a job they’d been doing very well for over two-thousand years. That was, until powerful, greedy people began turning cities into chaotic, dangerous wrecks by building whatever they pleased, wherever they wanted, to make as much money as they could – silencing and eliminating any surveyors who got in their way… until there was only one left. That one became the Last Surveyor, and he used the technology of the surveyors to build four special machines, as well as a computer programme that could search through datatime, giving him access to digital time travel. Then, as his final human act, he uploaded his consciousness into a supercomputer so that he could live as a digital being, searching for a special team to help him save his world.

Revealing a collection of super-surveying robots, the Last Surveyor unveils his plan. His technology; their talents. Together they could save the future! The Last Surveyor doesn’t have to wait long for a reply to his challenge. Soon enough, four formidable robots are sent soaring towards Middletown at full speed. As the chaotic urban mess comes into view, a new figure appears. G.E.O G.I.N.G.E.R is the team’s onboard digital assistant, and she gets right to work, using LiDAR tech to scan the area. The results do not look promising. Collapsing buildings, perilous roads, craters in pavements and houses hanging by a thread from the side of tower blocks… the team have their work cut out for them already. Wherever should they start?

“You could start by saving your school,” G.E.O G.I.N.G.E.R suggests, “That hanging house is about to fall right on top of it…”

Will the GeoSquad make it in time to save the perilously positioned pupils in the school playground? Will the Last Surveyor’s marvellous mechs be up to the task? And will the gang manage to keep their future-saving activities secret from their schoolmates, teachers and parents!? Click the link below to read the adventure and find out for yourself!

Get Kids into Survey Resources