Get Kids into Survey Presents “RIEGL”

In today’s Character Spotlight, we discover a little more about one of GKiS’s awesome sponsors “RIEGL”. Written by Bernhard the Bear: 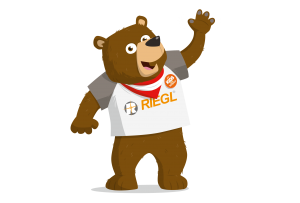 Location: We are global! RIEGL has its main bear camp (Headquarters) in Austria, and also has offices around the globe. But more importantly, our clients, (who usually become friends) are using our RIEGL scanners on every continent, and in almost every country in the whole world. Now we just need to put one on the moon!

Why did you get involved in Get Kids into Survey? We love kids. And kids love technology! We want to do our part to encourage the next generation of surveyors, scientists, animators, etc. RIEGL has been a GKIS supporter from day 1! We love the fun comic book style of the GKIS program and want to help get it into the hands of kids who might have never even heard of LiDAR. It’s a springboard to bring in the new talent.

What do you do? We invent equipment that helps engineers, scientists, animators and contractors put their dreams into 3D. Over 40 years ago we started working with LiDAR, which is really just a spectrum of light waves that humans (and bears) can’t see. We think we’ve nearly perfected the equipment that men and women use to create what techies are calling a “Digital Twin”. A Digital Twin is an exact copy of something but it’s virtual…on a computer, TV or movie screen.

How long have you been in the survey industry? Since before you were a twinkle in your father’s eye! 42 years ago a small group led by our founder and CEO Dr. Riegl started the company. I was a rod-bear, and that means I would hold equipment for the rest of the crew. I would also prepare lunches for the RIEGL engineers and technicians – honey sandwiches, my favourite. Now we supply equipment to people all over the world and I get to go to all kinds of amazing places – jungles, deserts, glaciers, mountains, even over the ocean! 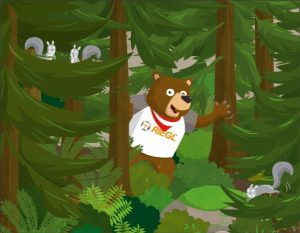 How did you get into the Industry? One summer I was playing catching fish in a mountain stream in southern Austria, when a drone flew up in the air nearby. Of course that captured my interest! I’d never seen one like this before. It seemed to be carrying a package, and it was going back and forth in a pattern. This was very unusual. You don’t often see a drone in the middle of a forest! So I followed the flight path with my eyes, and watched to see where it would land. I just had to go over and investigate. What the Bear was going on!?! After a short hike I rounded a clearing and saw what turned out later to be a team of RIEGL engineers. Everyone seemed really happy, and obviously they were celebrating a successful mission. They saw me and invited me over to see what they were doing.

It turns out they were testing a very small LiDAR scanner that had been mounted on a UAV (drone). The scanner was the “package” that I had seen on the drone. Mystery solved! The RIEGL team explained to me that the team had been doing several experiments that day to test a new scanning system they had invented just for drones. They excitedly added that it had wildly exceeded their expectations!

I was so interested. I had never even heard about LiDAR before that day. Only an hour ago this little unit had been scanning the mountain area and could even scan the riverbed — the ground surface under the water! On a laptop they showed me a 3D image of the mountain and the riverbed. They showed how they could use the data to measure distances and volumes in seconds. Wow! Scientists and engineers would really love this feature. I had so much fun that day that I asked if they could use a bear like me on staff. Dr. Riegl said, “Sure! You seem like a very smart bear. Let’s give it a try.” Long story short, I started my career at RIEGL that day. I began by helping them pack and load up the equipment, and pretty soon I had a promotion and a full time job. These days I fly around the world to meet with RIEGL clients, most of whom are scientists, engineers or university professors. My job is to help them understand all the features of the scanners RIEGL, and assist them as they decide which equipment they need for their missions. That day in the woods changed my life, and I haven’t looked back since.

Funny Fact about you? They designed Gummy Bears after me. (I love them. Especially the orange ones! Swedish Fish too.) Also, I’m ticklish.

Favourite piece of kit and why? I like LOCATE THE TECH! I think it’s like a treasure hunt.

Favourite Survey Technique and Why? I like using the terrestrial laser scanners the best. They may not be the fanciest, but they can do so much! They are like workhorses and you can take them anywhere easily. The scanner and camera fit in one small hard suitcase that has wheels. You can just grab the suitcase and a tripod, and off you go to your next adventure. With this equipment you can go to some really remote places with minimal fuss and pre-planning, and get amazing 3D pointclouds (Digital Twins!) in a flash. Pack along your favorite sandwich, because often there are no restaurants where we are going!