During lockdown, a group of key worker pupils from a Manchester primary school embarked on an out-of- this-world learning adventure! They were presented with an intriguing scene: a large crater in the middle of a high street, caused by a strange object that had fallen from the sky, which lay buried at the end of a long, dark and foreboding tunnel. Since this was no place for human exploration, the group put their geo survey skills to the test to find a way to explore the tunnel safely, and discover the extra-terrestrial cause of the colossal crater… 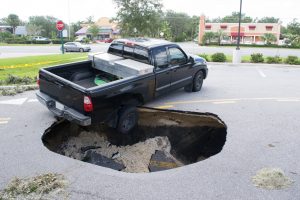 At the start of a series of lessons, the pupils were shown an above-ground image of a large hole in the middle of a street. They were challenged to adopt the persona of a member of the public, and describe what they came across as they approached the scene – paying particular attention to the most hazardous elements…

“…As I was walking down the pavement, I saw a group of people gathered together. They were being very noisy, shouting things like, “It fell from the sky!”, and, “What could be down that deep, mysterious hole!?” When I got closer, I realised what all the commotion was about. There was a huge crater right in the middle of the pavement! I could see broken utility lines spitting water and sparks of electricity. Even stranger, there was green smoke coming from the dark, gloomy hole. It smelled like rotten bananas! I wanted to get closer, but the police started pushing everyone back – I almost tripped over with the herd of people coming towards me. Suddenly, I saw these weird-looking scientists in strange suits going towards the scary crater, so that they could investigate this curious matter…” 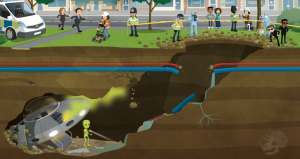 Having set the scene, pupils were given a sneak peek at what lay beyond the entrance to the crater, via the Get Kids into Survey Learning Sheet.

They explored the scene in detail, focusing on the various hazards – which were much more visible in the expanded image – in order to assess the viability of sending an investigation team into the tunnel. 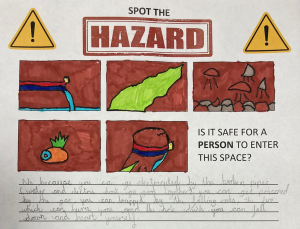 The group managed to identify five separate hazards that might make the crash site a no-go area for the investigators. They noticed that the broken utility pipes posed a problem – especially with the potentially catastrophic combination of electricity and water. They noted that the strange green smoke floating up through the cavity might well be toxic, and that where there is smoke, there is likely fire – just like the one on the alien’s ship! The group also identified the crumbling rocks as a hazard; one that could crush an investigator or cause a cave-in that would trap them underground. Finally, they identified the crater itself as a fairly hefty fall risk! All in all, the group agreed that it would not be safe for a person to enter the space… So how would the investigators ever find out what was down there?

Geo-tech to the Rescue 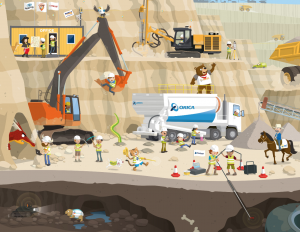 Using the Get Kids into Survey Mining Exploration Poster, pupils explored the technology that surveyors use to investigate and map cavities, caves, rocky areas and hard-to-reach places. They learned about LiDAR technology: devices that emit light rays and measure reflections to create a 3D image of a given space. They also discovered that these scanning devices can be mounted to a variety of vehicles, turning them into mobile mapping systems. The pupils noticed that, in the poster, there were three mobile mapping systems: one where the LiDAR scanner was mounted to a robotic vehicle; one where a scanning device was fixed to a drone, and one where a 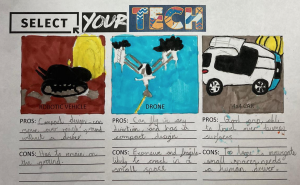 LiDAR unit was mounted to a 4X4 vehicle. The pupils were asked to generate pros and cons for each of these systems in the context of exploring the underground tunnel from the street scene.

After weighing up their options, the group decided that a robotic vehicle-based mobile mapping system would be best suited to their exploration needs; it being small, able to traverse rough terrain, and operated safely via remote control. Now it was time to get to work on their very own prototype!

Having analysed the conditions under which their robotic vehicles would have to perform, pupils got to work on designing model prototypes for their own remote controlled, all-terrain modes of exploratory transport.

Pupils transferred these designs from 2D sketch work to a 3D net, creating a custom body to fit over a cardboard chassis. They added axels and large wheels for all-terrain performance. 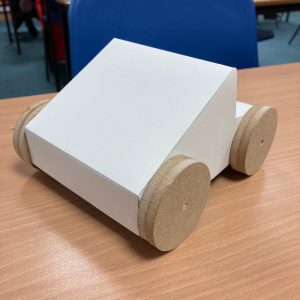 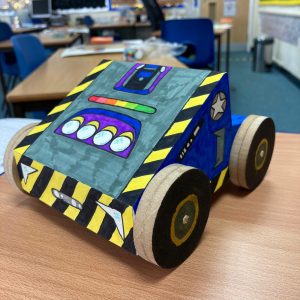 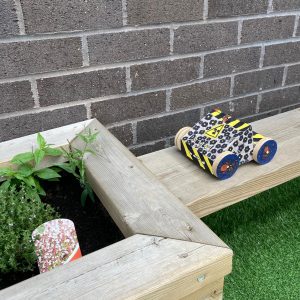 The result of the groups’ creative efforts was a set of prototype vehicles that looked like they could take on any survey situation, no matter how out-of-this-world it was! The children even took their models outdoors to put them through their real-world paces…

To round-off the project, the group used their drama skills to enact the discovery of the alien ship, and the reactions of the various people in the original scene. The pupils enjoyed the Shared-Space Invaders project immensely, and through the imaginative Get Kids into Survey stimuli, and a creative, cross-curricular teaching approach, they learned a great deal about cutting-edge professional technology, hazard safety, and the fascinating world of underground survey.