In a primary school in Manchester, a group of key worker children were set a lofty challenge… to save the planet! Using the Get Kids into Survey Forestry Exploration Poster as their starting point, they would explore the importance of ecological study and natural resource management, the global effects of deforestation, and the ways in which they could employ their geo-survey skills practically to do their part to make the Earth a little more green! 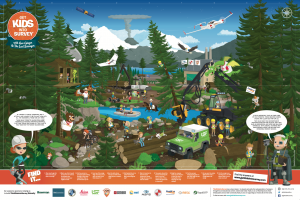 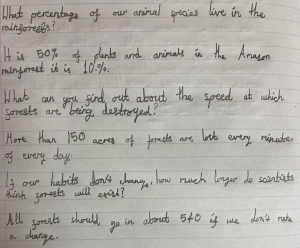 Pupils used the forestry-themed exploration poster to find out about all the hard work that goes into maintaining, managing, protecting,
using and replenishing forests around the world. However, they also learned that not every forest around the planet is managed with such care. This discovery prompted a fact- finding mission, where pupils used their research skills to discover the impact of global deforestation…

What Trees Need… and Why We Need Trees! 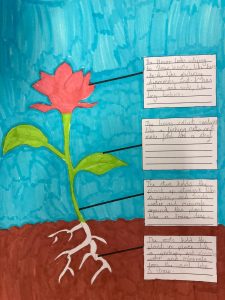 Pupils used similes to help them remember the functions of the different parts of a plant, e.g., “The roots hold the plant in place, like a ship’s anchor!”

Having garnered a more thorough understanding of the problems caused by deforestation, the group soon became determined to do something to help. Before they could get started, though, it was important for them to expand their knowledge when it came to all things green! So they began to create their own guides to plants, starting with the basic anatomy and functions of the various parts of a plant, then moving on to study the oxygen / carbon dioxide cycle as it exists between animals (including humans) and plant life. 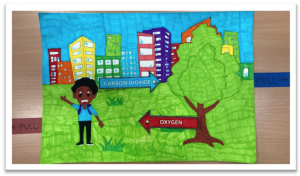 The group also created interactive pull-tab diagrams to show the absorption and expulsion of gases between humans and plants. 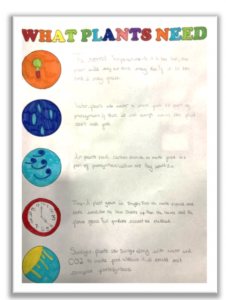 The group added a ‘What Plants Need’ guide to their growing resource bank, detailing five key factors that affect the healthy growth of plants, and the potential consequences that might occur if any of these needs are not met.

“Time – a plant grows in stages. First the roots expand and take hold, then the stem shoots up. Then the leaves and the flower grows. This process cannot be rushed.”

The group also managed to take what they’d learned into the virtual environment, creating animations using a computer coding programme to illustrate the growth process of a plant:

With the pupils’ understanding of the severity of deforestation around the globe – and the importance of plants to support animal life – growing with each activity, they were relieved to hear that organisations have been established the world over to tackle this crisis. One such initiative, with which some of the pupils were already familiar, was #TEAMTREES. This planting project was set up by two YouTubers with the goal of planting twenty million trees to help in the fight against deforestation; a goal that they managed to reach with the help of mass public donations. Not only did the #TEAMTREES initiative succeed in reaching its target, it managed to surpass it, and its work continues today. In response to this, the group produced posters to be displayed in school, in an effort to further increase awareness of the project. They looked at interesting iconography around reducing, reusing, recycling and conserving, and put their own twist on them to create some highly impactful pieces… 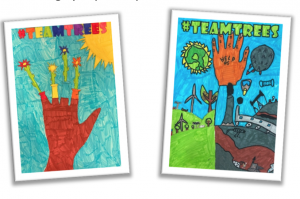 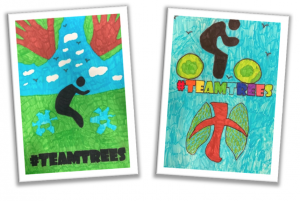 Mapping Out Our Mission

With the group fully immersed in forestry, plant biology and deforestation awareness, the time came to turn study into action! This would be where the pupils’ survey skills came in handy – in particular their knowledge of mapping.

The group began a study of global coordinates; more specifically, they began looking at the decimal degree system for finding extremely precise locations anywhere in the world. This study began with a look at basic coordinates, which expanded into work on four-quadrant coordinate readings. With that under their belt, the pupils went on to look at how the decimal degree system built on the idea of segmenting an area of land into smaller and smaller grids, based on lines of longitude and latitude, to provide precise positioning data. This linked with and reinforced their previous work on map-making and use of satellite data in geo survey work.

Once the pupils understood the format and function of decimal degree coordinates, they were set a challenge – a virtual treasure hunt – with the goal of locating famed landmarks across the globe.

The pupils became so adept at this so quickly, that the following day they came back to school with their own examples of landmarks which they had pinpointed using the decimal degree system!

As a final challenge, the pupils were asked to locate the position of their own homes using the decimal degree system. Once they had completed this task, they were asked to pick a specific location in their garden – one that they knew, according to all the work they had done around what plants needed to grow well, would be a suitable place to add a little more green to the world…

Making the World a Greener Place 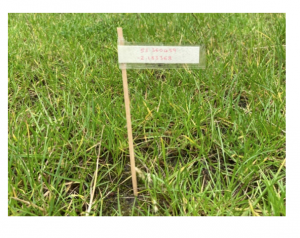 With their perfect plot picked out, the pupils noted down the decimal degree coordinates on a piece of paper and created a marker for their planting spot, which would allow them to keep track of the exact position of their plant. This would hopefully mark the first of many planting efforts, all of which would be logged with precise positioning data that could be used to track growth rates and the effect of factors like weather and care regimes.

Thanks to the Get Kids into Survey Forestry learning project, these pupils were able to increase their awareness of global conservation issues, and at the same time, use the skills they learned to do something practical, however small, to help redress the ecological imbalances they encountered on their learning journeys.