In today’s Character Spotlight, we discover a little more about one of GKiS’s sponsors “Measutronics Corporation” in our latest interview with their President, Lou Nash. 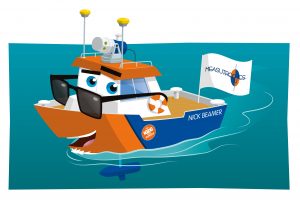 Location – We have offices in Lakeland, FL and Vancouver, WA

Why did you get involved in Get Kids into Survey? I got involved with GKiS because kids are our future and their education defines their future. I truly do love what I do for a living and credit the education I have received for creating the opportunities that lead to my eventual career.

What do you do? Our company provides marine positioning, guidance and underwater imaging solutions to the marine construction and hydrographic survey industries.

How long have you been in the Survey Industry? I began working in the survey industry in 1992 and founded Measutronics Corporation in 1997.

How did you get into the Industry? I went to college on a scholarship from the US Navy. After graduation, I served as a naval officer onboard a number of surface combatant ships.  My last assignment in the Navy was as Navigation Officer onboard a destroyer.  In that role, I was exposed to a number of navigation techniques: celestial, radar, LORAN, DECCA, OMEGA and eventually a brand new technology, the Global Positioning System (GPS). I developed a keen interest in positioning and charting and decided to build on that interest, as well as my experience at sea, when I left the Navy for another career.

Funny Fact about you?  I grew up in Kentucky and joined the US Navy without ever having seen an ocean.

Favourite piece of kit and why? My favorite piece of equipment is a multimeter. I’d built an analog multimeter from a kit as a kid and became fairly proficient in trouble shooting electronics as my high school years were spent in vocational school studying radio and television repair. The basics stayed with me through college and into the Navy. While in graduate school, one of my professors liked to say that, “the most important tool in a survey truck is a shovel”. I was working with quite a bit of electronics at the time and liked to counter that a multimeter is the most important tool when working afloat. A mulitmeter, understanding of basic electrical and electronics theory, and a good system user’s manual will prove invaluable where electronics and saltwater have to coexist.

Favourite Survey technique and why? Side scan sonar has been a favorite technique of mine because my first use of the technology was at the end of the predominantly analog systems. As a new user, I quickly transitioned to the newer, fully digital systems. The differences between analog and digital systems really highlighted the benefits of ever evolving technology.

How did you choose the character and what does he/she/it represent? Mean to you? What’s his/her name? Our company’s first survey vessel is named as a tribute to my father-in-law who passed away while the vessel was being built.  He had a saying, “…a nickel more and you go first class”. He was a first class kind of guy so I named the vessel, A Nickel More as a tribute to him. Our second vessel was named along the same theme, Put Another Nickel In. Our GKiS character had to follow the same theme – Nick for “nickel” and Beamer for the sonar beams aspect.  Nick Beamer!