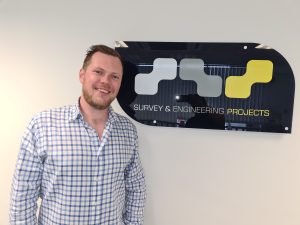 Where did you study? How did you get into surveying? Studied Marine Geography at Cardiff University. I’d never heard of Hydrographic Surveying until I started my course. I did a placement year in my 3rd year – which was a year at South Wales survey company. I learned very quickly about Hydrographic and Geophysical survey, as well as beach topographic surveys.

I’m now a Business Development Manager for a Land and Hydrographic Survey company.

How long have you been in the industry? 15 Years this summer.

Are you part of any associations or organisations you would like us to mention? We’re members of TSA for all of our survey related questions. We are also members of Mersey Maritime and Wirral Chamber of Commerce.

Why do you want to be a GKiS Brand Ambassador? In the past I’ve done a number of talks within schools about the Hydrographic Survey industry. There was some very good engagement, and it was very rewarding. Since joining a land and marine survey company, there would be a lot more to talk about – with more career paths to choose from . There are already a lack of surveyors coming through, so if I can inspire a handful of local kids into a career in surveying, it will be a huge boost of the local workforce.

Why is it important for kids to know about surveying and the wider geospatial industry? A lot of people within our industry, including myself, just stumbled across the industry without ever planning to go down this route. Once we were in, we could see how rewarding a career it could be. Telling kids about the industry early, will give them the best chance of choosing the right subjects to get the best jobs that suit their strengths and interests.

What are you going to do as an ambassador for GKiS? Hopefully going into as many schools as possible on the Wirral and in the NW to promote the industry.

What are your hobbies? Mostly involve Football or sport of some sort. Watching Sheffield Wednesday or Non-League local teams. Watching my 6 year old son, who’s now playing at Manchester United. Watching my daughter do her gymnastics and dance competitions. Playing cricket (Whenever I get time!)

If you/your company had a GKiS character, what would it be? We’d have to have a marine based animal for the Hydroside – A dolphin or Shark maybe.

What poster or resource would you like to see next from GKiS? A hydrographic survey posted would be cool. Showing bathymetric / geophysical / UXO / Asset inspection surveys

Anything else you want to add that you think our audience (surveyors, teachers, parents) would be interested in? Maybe a preview of the types of training we do as Hydro surveyors. (BOSIET Includes the helicopter ditch training – which is really cool)