A Cold Case…the Mysterious Murder of the Abominable Snowman. Bringing Geography and Geo Survey to Life –

In the final week of what has been an out-of-the-ordinary academic year, a group of key worker children set out to solve a fittingly out-of-the-ordinary mystery: the baffling demise of the abominable snowman. They were asked to take on the role of CSI – Crime Scene Investigators – to collect, collate and analyse a range of evidence, biological samples and eyewitness accounts, linking them together in order to discover the true culprit behind the tragic departure of the giant yeti… 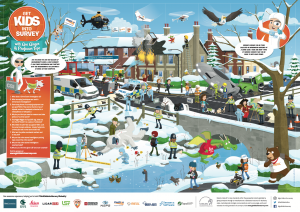 The group started with the Get Kids into Survey CSI Exploration Poster and, with the help of the prompt questions, quickly identified the number one suspect.

They spotted the red footprints and the telling toilet roll – following both across the village green, over the bridge, up the tree to find… 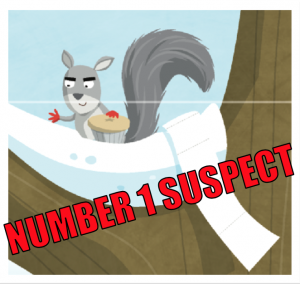 All signs seemed to point towards this mince pie stealing, toilet roll touting, red-pawed menace. That was, until the class was read the transcript of a phone call to the emergency services that came just moments after the yeti met his end – a call that cast a sudden and murky shadow of doubt on the murderous squirrel theory…

The frantic call included tales of some odd goings on occurring ‘down by the lake’. The caller reported that a huddle of suspicious characters seemed to planning something, even though, by her own admission, the members of the gang couldn’t actually talk. Luckily, she was able to provide some general visual descriptions, which the group used to search the scene for possible culprits. It wasn’t long before they found some unusual suspects…

Having identified the group of shifty-looking animals as ones-to-watch, the group received photographic evidence collected from the burnt-out house, not far from where the yeti was found. This brought to light some interesting new information, and made clear the importance of a CSI’s work, their methods, and how they help in solving crimes. The group linked their previous learning on LiDAR and measuring technology to the work of CSIs, noting that a lot of the survey techniques with which they were already familiar were being used at the crime scene. For example, there was a GPR scanner being used to ‘look’ for anything suspicious below ground, and there were LiDAR scanners collecting digital image data to facilitate the creation of a virtual crime scene. There was also some good old fashioned photography going on, and the pictures taken inside the house where the fire had occurred were of particular interest to the pupils…

Whilst the hairs might have been put down to the family dog – and the claw marks too (although they looked too wide and too deep to belong to Bingo the friendly beagle), the size of those footprints pointed towards one very distinct owner. However, it wasn’t enough for the pupils to assume that they belonged to the yeti; putting him at the scene of the house fire was a big step to take – pun intended! They had to know for sure that these footprints belonged to something abominable. It was time for a crime scene recreation!

First, the pupils took the dimensions from the footprint and created their own replicas:

Then, using the stride measurements taken by the CSI team (80 inches between each print), the group recreated the path taken by the owner of the footprints through the house: 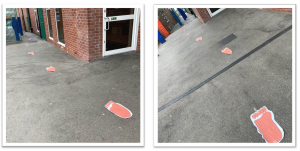 Once the footprints had been laid at carefully measured intervals, the group took turns to try and cover one of the single steps with their own feet. Whilst some pupils almost ended up doing the splits, and a few members of staff also tried their best, no-one was able to match the stride length of the owner of the footprints. A second challenge saw the pupils taking leaping bounds along the footprint path to see how many of their steps it would take to cover the same distance that the footprint owner covered in eight. Even with their best, bounciest efforts, the lowest any pupil managed was thirteen steps. These endeavours confirmed the group’s suspicions: there was only one character in the scene tall enough to leave footprints like that… the yeti himself. And if those footprints were followed, the pupils noted that they led back to the burning house – putting the yeti at the scene of a possible arson attack! 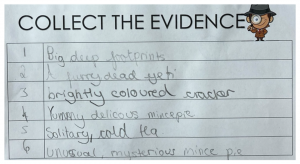 With the shocking revelation that the yeti must have been in the house where the fire was before the blaze got completely out of control, the group was compelled to examine the epicentre of the crime scene once more. They focused on the yellow numbered markers dotted around the yeti, and they learned that these are used in the collection and collation of evidence. They help CSIs and police to keep track of individual pieces of evidence, and in this scene, there were six key items. The group described each one in their notes, and began to think about what they could mean in light of the latest information from the CSI team. The Christmas cracker became a particular item of interest, especially after it was revealed to have contained an expensive gift…

While re-examining the crime scene, the group noticed the two shady agents across the road, both of whom were looking very concerned. It seemed that they had been making their own inquiries, and had turned up some very interesting evidence from their analysis of the villagers’ social media pages…

The pupils recognised those shadowy silhouettes immediately: the animals from their suspect sheet! It was beginning to look like this village had its own squad of furry vigilantes, who tracked down criminals and brought them to justice. But if the ducks, the sheep, and that sneaky squirrel were the good guys, what did that make the yeti?

It was time for a final review of the evidence…

Lesson Plan can be found here